The following are some past projects undertaken categorised in reverse chronological order. These project are not at all recent. We do not update this page anymore so please goto our News page for the most recent projects and those still underway. Follow the links to jump to sections grouped by company.

We travelled to West Meath in the republic of Ireland for Atkins Fulford Hydro to investigate a problem with the microfiltration system. The system is controlled with three micro PL7 PLCs, one for each of the two filters and one that acts as a master control. The problem turned out to be that both feed pumps were kept running should one of the filters fail. This was modified and tested. 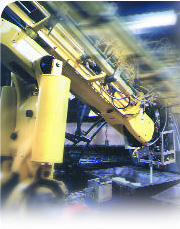 Over the summer of 2007 we assisted Daval Controls Ltd. at Proseat (Woodbridge) with an upgrade to their moulding line 2. The control system we modified is the existing Rockwell 5/05 which has a RSView32 SCADA connected to it over Ethernet. The plant was being increased in size (22 to 35 moulds) with other equipment being controlled from a Schneider PLC as well as the Fanuc robot control.

We have completed the development and commissioning of an IWSS (Isokinetic Wellhead Sampling System) rig used to increase the accuracy of the Vx flowrate measurements in wet gas conditions for Schlumberger in Aberdeen. The system uses TwinCAT with a C# (.NET) control engine and includes Profibus and Modbus networks. It is intrinsically safe and EX certified. This was an protracted project that required travelling to Aberdeen for a week at a time to suit the project mechanical/electrical status as well as financial allocation and the re-assessment of overall design after the project was let down by the original software designer.

We have now completed commissioning of two Kuka robot cells with Daval Controls Ltd. Both controls use Siemens S7-300 PLCs and HMIs on a profibus network. One is to control and schedule the loading and cleaning of bolsters and die holders for an extrusion press in Hereford. The other is to manage and control the hemming of automobile boots and bonnets. Modifications to the original design were requested to the press loader robot sequences to improve cycle time and encorporate operational changes the following year.

We designed, coded and FAT tested an SLC system for water channel cleaning with bandscreens in Layah.

We supported Fusion Technologies Ltd in Bristol with their installation of an electron beam welder at Rolls Royce, Hucknall. The CNC and operator front end are bespoke software and the machine interface is a Siemens step 7 with Profibus network and distributed I/O.

We have re-written the inlet works control software to include a second washwater channel that included re-sequencing the screens and subsequently the addition of isolation penstocks. This is an SLC500 system.

We have completed the development of a PC controlled industrial printing machine for Aluminium slab at ALCOA Kitts Green. The control is achieved using the TwinCAT I/O system and programs written in .NET framework and C#.

We have modified the block bar coder machines for specific feed rates and counts due to the unreliability of the current gap detection system at Aggregate Industries, in Calne. The controller is an SLC 5/01.

We have completed an order for the design and delivery of a BMS system for Block C of the new hospital at Mater Dei, Malta with ESI. We have submitted panels C01_CC1/CP1_CC1, C02_CC1, C03_CC1, C04_CC1, C05_CC1, C06_CC1, C07_CC1, C07_CC2 C08_CC1 & CP2_CC1. Each panel had a Siemens 300 PLC and an HMI using WinCC. Masterdrive (pump control) and Simocode (fan control) units were linked over Profibus and an ethernet network connected all the PLCs from all the blocks for SCADA control and monitoring. The commissioning was undertaken by ESI engineers on site.

A retrofit was carried out for Switchgear International of the control system for the pumps that are used to maintain flow from Elmstead market pumping station. An SLC 500 with a PanelView+ mimic were used to sequence the pumps generating a required flow.

We have just completed the Beenhams Heath Micro Filtration project. This site, near Reading, will filter supply water to the area including the micro-filtration for Crypto-sporidia. This is an SLC 500 system with a Panelview HMI.

Becton Dickinson serves industrial laboratories and institutions with products for biopharmaceutical production, environmental monitoring, drug discovery, and high throughput screening (HTS) to enhance clinical and diagnostic research. BD offers refillable serynges and other parenteral drug delivery devices to pharmeceutical companies and manufactures precision glass tubing and ampoules for a variety of applications. We were called in by Wilkinson Electrical (Plymouth) to design and install two air lock systems at Becton Dickinson in Swindon as part of internal improvements. An air lock room is used to maintain integrety of controlled atmosphere of production rooms with respect to changing and tool transfer rooms. A request to enter using a pushbutton or footswitch will allow entry and dissable entry from any other door as long as another door is open.

We have started supporting Fusion Technologies Ltd in Bristol with their software requirements. Fusion are specialists in electron beam welding and supply and support CNC machines for all applications. 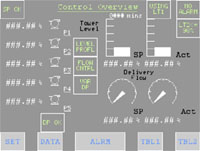 Working for Switchgear International, we designed & implemented the PLC and HMI software for a retrofit control system at Horsley Cross pumping station. Pump sets are used to maintain the water tower level according to a demand look up table. An SLC500 with a PanelView touchscreen was used.

Working with Harland Simon ICS Limited to design and implement the replacement of the existing Siemens inverters with new ones. Control of synchronization panel is with Allan Bradley SLC-500 and interface to existing SY/MAX PLCs with Modbus+ network. All the inverters have now been installed along with the Interface panel. The old synchronisation panel is still in situ, though isolated and off.

Working with Daval Controls Ltd the software for three robot welding cells was written and commissioned for Wagon in Wantage. The cells weld chasis members for the new Rover 75 cars. Siemens S7 PLCs were used with OP (TP170B) HMIs to control and monitor the clamp and door sequences and interface with the robots as they run the appropriate weld program. Kuka robots were used.

Working with Atkins Fulford Ltd, the PLC software was written and commissioned on site in the Highlands. The systems consist of either single or two fiters with an SLC500 PLC. At Mallaig manual control is acheived locally and the system interfaces via I/O with another SLC500 which controls the rest of the plant and is linked to a PanelView 1400. Bonar Bridge interfaces via I/O to a telemetry system as does Banff.

Working for the Meat & Livestock Commission to modify the control system used to automatically feed pigs at Stotfold pig development unit, Hertfordshire. This was a second trial into the production of pig feed made from a blend of products (some by-products) to find a cheap and nutritious substitute to traditional swill (now banned under tighter controls). Both dry, liquid & fermented feeds are tried. A re-calibration of the PH and temperature sensors was undertaken as well as correcting the dial-out control box.

Working with Atkins Fulford Ltd, the PLC software was written and commissioned on site at Bray near Windsor. The system consists of five fiters each with an SLC500 PLC with a main SLC500 to control ancillary plant equipment. A DH+ network links all the PLCs and a Modbus link over telephony is used to connect to a central control station and is used for telemetry, control interlocks and SCADA data.

Assisted ASE with developement and on site testing of Factory Link SCADA for baggage handling systems at Heathrow Airport Terminal 3.

Working with Atkins Fulford Ltd, the PLC software was written and commissioned on site at Denge in South East Kent. The system consists of two fiters each with a ControlLogix 5000 PLC. A ControlNet I/O network was used to interface the filters with the main plant control PLC. Ancillary control was performed by the main PLC.

Assisted ASE with developement and on site testing of Factory Link SCADA for baggage handling systems at Dublin Airport.

Working with Atkins Fulford Ltd, the PLC software was written and commissioned at Ballysallagh, near Bangor, Northern Ireland. The system consists of two fiters with an SLC500 PLC per filter and a main PLC (also SLC500) linked on DH+. Manual control is acheived locally with a PanelView 1000 also on the DH+ network. The system interfaces via I/O to a Siemens PLC which sits on a site wide Profibus network. Some digital I/O is used to synchronise the feed pumps.

Working for Allen Process Systems in London to write the PLC program for a water separation system for the petrogas industry at Salalah. A Rockwell SLC500 PLC with RSView32 SCADA was used in a dual redundant hot standby configuration.

Working with Atkins Fulford Ltd, the PLC software was written and commissioned at Woodgreen & Matchams, in the New Forrest, Hampshire. The systems consist of either four or five fiters with an SLC500 PLC per filter and a main PLC (also SLC500) linked on DH+. Manual control is acheived locally with a PanelView 1000 also on the DH+ network. At Woodgreen the system interfaces via RS485 to the site SCADA (InTouch), to telemetry and with digital I/O to synchronise the feed pumps. At Matchams the system interfaces to telemetry and feed pumps via I/O.

Working with DNC Machine Tools Ltd, a retrofit for BAe Systems of two lathes to be used in the shaping of misile charge. Fanuc 18i controls were used.

We re-instated and enlarged a PC network during relocation of CeC Marketing in Swindon. Further assistance was supplied with network management.

Working with ASE, the software for the Puma engine block heat treatment ATI line was re-written to correct sequence response to hardware faults. The operator interface (Monitor 77) was expanded to include QA product tracking and implemented on the SCADA (InTouch). The PLC is a Telemecanique TSX 47 with an ASI fieldbus.

Working for Switchgear International Limited, a Rockwell RSLogix PLC and a PanelView operator interface were used to control a lime dosing system on a new sewage processing plant near Clacton-on-Sea, Essex.

Working with DNC Machine Tools Ltd, a retrofit for BAe Systems of a Kevlar overwind machine was achieved using a TwinCAT soft-control solution and a VBasic OCX MMI.

We assisted in the commissioning of a Masson Scott Thrissell paper mill at Colombier in Sittingbourne. A Siemens 318 was used to replace the original control.

Assisted ASE with software application for networked PC and handheld scanners for bar code reading at Direct Wines, Reading. The applications were written in C/C++.

Assisted ASE with developement and on site testing of Factory Link SCADA for baggage handling systems at Newcastle Airport.

Several small CNC jobs which included a memory upgrade on a Fanuc 6 and a serial link implementation on another Fanuc 6. The upgrade of their DNC link system using Camtek NCCOMs software. The installation of the new DNC link for part program distribution system, included linking in with a factory wide ethernet network supplying the shopfloor PCs with the TAP format part programs.

The PLC network is expanded to include a third PLC to load share and give extra capacity for further logic to be implemented (in particular the cooling fan control) at ALCOA, Birmingham.

Working for ASE, the rewriting of the software to control a hopper measuring and distribution system controlled by a TSX 47/30 processor and including an XBT (for operator control) and 6 Altivar drives on a Unitelway network. This was required as the memory had been corrupted by power spikes.

Netware 4, MS-DOS and Windows 3.1 with ISDN connection and web pages.

1 Symax 400 with PCIM SCADA and menu written in C.

Quotation software for systems and TSX products written with Foxpro.